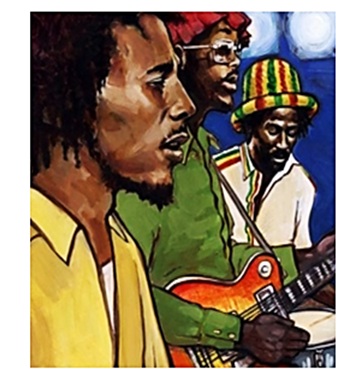 The Most Successful Reggae Act in the History of Pop Culture

When Bunny Livingstone aka Bunny Wailer invited his stepbrother Bob Marley and close friend Peter Tosh to form a band called The Wailing Wailers, no one could have envisaged that it would have become the most important band in the history of Reggae Music.  The main reason for this was that in 1963 the music genre of Reggae had yet to be invented.

Both albums were mixed and inside the studios of Island Records in Basing Street.  It would be the last album the trio recorded under the line up.  Four years later with a change to personnel, with Bob Marley now at the helm and new name Bob Marley & the Wailers – the seminal album Exodus was recorded at Island Studios.

The album would eventually become voted by Time Magazine as the Best Album of 20th Century.

To celebrate the musical life and achievements of Bob Marley, Peter Tosh and Bunny Wailer, a Blue heritage plaque is to be installed on the former Island Studios in Basing Street, Notting Hill.

To celebrate the musical life and achievements of Bob Marley, Peter Tosh and Bunny Wailer, a Blue heritage plaque is to be installed on the former Island Studios in Basing Street, Notting Hill.

The installation ceremony will take place on Friday 4th October 2019 at 6.30.p.m. in the evening, and will be attended by special guests and famous personalities from all over the world.  The unveiling  will be followed by a special reception/after party at the Mau Mau Bar 265, Portobello Road W11  1LR from ( 8.00pm until midnight) where there will be a musical tribute to Bob Marley , Peter Tosh and Bunny Wailer delivered by various guests and Celebrity DJ’s .

THE BROTHAS MEETS THE SISTAS PART 4